Overview:
Despite extensive research, brain function and neurological diseases are poorly understood. Complexities arise from the quantity of neurons in the brain and from the densely interconnected networks of intermixed cell types. There is a need for methods that noninvasively probe the underlying micro-circuitry in the brain with single-cell resolution.

Over the last decade, calcium imaging and photoactivation have emerged as solutions to this problem, providing all-optical means to monitor and manipulate circuit activity. Calcium imaging uses calcium indicators that bind with calcium to alter the fluorescence characteristics of neurons. When a neuron fires, there is an uptake of calcium into the cell body. If the firing neuron is illuminated with an excitation source during the firing event, then the fluorescence emission increases, generating an optical response that corresponds to electrical activity. Complementary to calcium imaging is photoactivation, which can use photosensitive proteins (optogenetics) or optochemical (caged) compounds to manipulate firing patterns either by causing neurons to fire or by silencing neurons. This combination of calcium imaging and photoactivation offers a means for neuroscientists to record the spatiotemporal dynamics of activity and map physical structure of circuits with single-cell resolution.

Liquid crystal spatial light modulators act as a programmable lens that can be used to manipulate the wavefront of the excitation source. In its simplest form, the SLM can be used as a programmable prism, redirecting light to a single focal point with a lateral shift. By adding prism functions together, the SLM can be used to create multiple focal points within a 2D plane. Furthermore, by adding weighting functions and lens functions, the SLM can redirect light to hundreds of focal points with a programmable intensity in a 3D volume. In two-photon microscopes, LC-SLMs enable multisite 3D scanless excitation for photoactivation, as well as high-speed volumetric imaging to record a volume of circuit activity. This combination provides neuroscientists with a toolbox for in vivo studies deep within the cortex to better understand the physical structure of neural circuits, the relationship of firing patterns, external stimuli and the resulting behavior, and how these processes are altered by neurological disease. 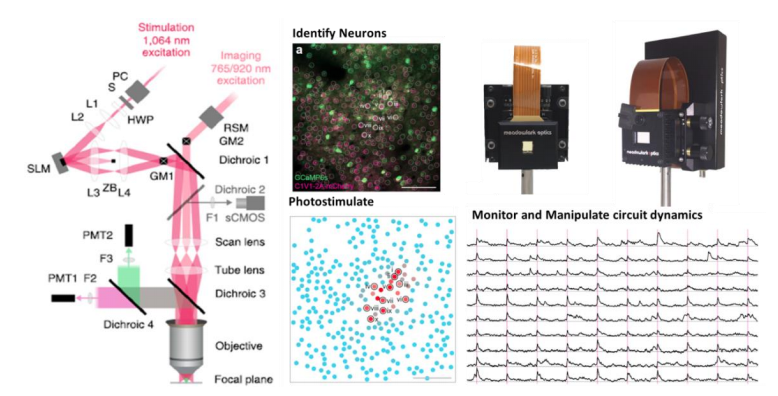 Critical requirements:
For this market the SLM must provide high resolution, high phase stability, low losses, and high speed switching. The SLM resolution determines the field of view of the neural circuits that can be studied. High phase stability ensures temporally stable excitation. Low losses are important for studies of large scale neural circuits where light is divided among the number of neurons under study. High speed switching allows the programmability of the excitation to match rates of naturally occurring circuit dynamics.