Introduction:
Raman Spectroscopy is a widely used and versatile form of analysis used throughout biology, chemistry and solid-state physics. Like all spectroscopic techniques it observes how light interacts with a sample in order to understand its properties. This can then be used to identify an unknown sample, monitor how stress affects a crystal structure or look for impurities. What makes Raman different from other forms of spectroscopy is that instead of looking at light which is absorbed, emitted or elastically scattered from a sample, it looks at the light that is inelastically scattered.

The Science of Raman Spectroscopy:
When an object elastically scatters off another object, it retains its original energy. Elastic scattering between light and matter is called Rayleigh scattering. It accounts for most scattering events seen between a light source and any given material. However, as discovered by C.V. Raman in 1928, light can undergo inelastic scattering with matter. In this case the photon of light involved has a different energy before and after the scattering event. Having either lost (known as a Stokes shift) or gained (an anti-Stokes shift) energy from the matter it interacted with. This change of energy can be measured as a change in the wavelength (colour) of the light. See Figure 1. 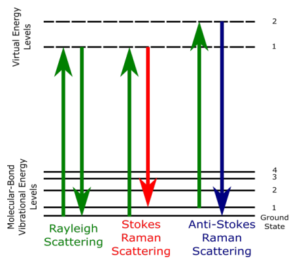 Fig. 1. Illustrative example of Raman and Rayleigh scattering events. We can see Stokes shifts give lower energy photons whereas anti-Stokes give higher. AntiStokes shifts are rarer as the system needs to already be in an excited state.

The energy for this wavelength change comes from a change in the energy state of a molecular bond or bonds. Note this is distinct from an interaction where the photon is absorbed by an atom and then re-emitted at a different wavelength, which is the domain of fluorescence spectroscopy. This means the wavelength shift in the Raman scattered light corresponds directly to the current energy states of the molecular bonds in the sample. As these are influenced not just by the atoms involved in those bonds, but the total crystal structure and the strain the system is under, one can interpret significant useful information from its Raman spectrum that can be difficult to obtain by other means.

Pros and Cons:
A significant advantage of Raman is it is non-invasive. It does not require any chemical tags or dyes to be inserted into a sample meaning often the sample is left unchanged. Raman can also be done without contacting the sample. This is helpful when identifying potentially dangerous materials. There are, however, limitations to Raman spectroscopy. First the likelihood of a Raman scatter compared to a Rayleigh scatter is approximately 1 in 106. This means the Raman signal tends to be a million times weaker than the incident light, therefore, one must filter out the much brighter Rayleigh scattered light. This is normally achieved with a sufficiently sharp dielectric bandpass, notch or edge filter. Furthermore, to get a good signal to noise ratio an intense light source is needed. The maximum resolution of the spectrum is also dependent on the spectral bandwidth of the source. As the minimum difference in energy shift caused by two different, but very similar, molecular bond states can very small this can be critical for certain measurements. These requirements lead us to the conclusion that single frequency lasers are the optimum light source for Raman spectroscopy.

Lasers for Raman Spectroscopy:
Choosing the right laser for Raman spectroscopy is critical as very different results can result from the same sample with different lasers. Firstly, the wavelength of the light has enormous impact on the results. The intensity of Raman scattered light is proportional to 1/λ4, which means a much stronger signal will be gained from using shorter wavelength light. Conversely many materials exhibit strong fluorescence when illuminated by intense light in the visible and UV, which can swamp the Raman signal. This means that many wavelengths from the near IR though the visible to the UV are routinely used for Raman. For samples liable to fluorescence we can provide high power lasers at both 1064nm and 640nm. Alternatively, as fluorescence often occurs in the visible, we can rovide lower wavelengths solutions, in the UV range. For samples where fluorescence is not an issue, we can provide 532nm green light and 320nm single frequency lasers.

Summary:
While single frequency diode lasers have clear advantage in terms of cost, power consumption and robustness. DPSS lasers are essential for high resolution Raman analysis of difficult samples due to their narrower linewidths and better spectral purity.