Introduction
With an increasing demand for advanced industrial manufacturing, laser systems have become the most important fabrication tool. While high powered lasers such as CO2 lasers are used for coarse cuts of metals, ultrafast lasers are used for fine cuts and polishing of semiconductor materials. Fiber lasers have the versatility to do both. In today’s consumer electronics, electrification of vehicles and green energy are driving the need for advanced laser machining and additive machining of complex materials. This requires the use of a combination of laser types, sometimes running in parallel to accomplish coarse cutting, welding, fine cutting or polishing at high speeds.
A focused laser beam can generate a significant amount of heat. High-power industrial lasers can generate in excess of 10,000 Watts during operation of thick metals. Temperature control of the sensitive optics inside the laser needs to be maintained to achieve peak performance. Changes in temperature can distort the laser wavelength as it passes thru the optics, causing  inefficiencies that can result in poor welds or sputtering. Compressor-based refrigeration systems have long been used to cool laser systems while thermoelectric-based chillers or coolers offer spot cooling for low power lasers and optical components. This application note will focus on how thermoelectric coolers can be used for spot cooling of industrial laser optics. 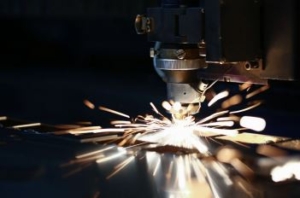 Application Overview
Laser systems are increasingly replacing CNC machines used in fabrication processes such as cutting, welding, drilling, and etching. Industrial manufacturers are looking for ways to reduce costs while increasing throughput and quality. Because laser systems are typically expensive, OEM’s need to justify the cost by reducing cutting or welding time, fabricating complex parts with unique pattern structures or producing parts with a high number of redundancies. In additive manufacturing, laser systems can create complex parts that cannot be made with CNC machines.
The main selection process for an industrial laser is based on the laser beam diameter and depth of cut it can achieve on the material the end user is processing.
Each market application requires a specific laser power range:

Excimer lasers are growing in popularity due to the growth of OLEDs used in consumer electronics for handsets, laptops and TV’s. OLED screens can have more than 30 layers and require a laser for removing or anneal each layer. Demands for fiber lasers are also increasing due to their versatility. These lasers use hundreds of laser diodes, which provides the scalability to control the power of the laser beam. In addition, fiber lasers offer higher beam quality, efficiency and are more cost effective than traditional CO2 lasers.
Industrial lasers systems larger than 10 Watts typically require some kind of active cooling. Large systems (more than 500 W) typically require an external compressor-based chiller and smaller systems (less than 500W) normally use a thermoelectric-based chiller or thermoelectric coolers. Internal optical components also require temperature control to ensure optimal laser performance. Depending on the material of the optics, these components need to be kept at a nominal temperature between 20 to 35⁰C with a temperature stability of ± 0.5°C. In addition, thermoelectric coolers are installed inside laser diodes used in fiber lasers to keep the temperature of the laser diode stable while ambient temperatures fluctuate.
Future laser applications will bring new challenges to laser fabrication. They are expected to come from market applications in quantum technologies, printing of organs, lower cost manufacturing for customized single-piece processing and very large-scale processing. Some of these applications will require a more customized light control by tailoring the energy to the laser for improved energy deposition. New wavelengths will be required to improve process efficiencies, such as ultrashort high-power UV lasers and ultrashort far-infrared lasers. For high volume production, multiple beam processing will be required.