Purpose:
Hybrid gold-iron oxide nanoparticles have been shown to hold great potential for heat triggered drug delivery. The magnetic core of the particles enables magnetic resonance imaging whilst the gold surface coating can act as a localised heat source after laser irradiation by exploitation of the surface plasmon resonance. Earlier work had reported heating properties in agar, inside cells and in tumour bearing xenograft cadavers after irradiation with a 1064 nm laser source. The purpose of this work was to test whether the Chromacity 1040 nm was A) useful for laser irradiation of these nanoparticles and B) more effective than the previous laser source.

Methodology:
A) Agar phantoms
Hybrid nanoparticles were suspended in 2% agar phantoms at 5 μgml-1 and 50 μgml-1. The gels were irradiated for 60 seconds using the Chromacity 1040 nm and changes in heat monitored using an Optris PI640 thermal imaging camera (Optris, Germany). The subsequent 60 seconds following irradiation was also monitored to understand the cooling profile of the particles. Heat dissipation was deduced from the infrared images up to 12 mm from the point of irradiation. All reported thermal change is in respect to a control agar phantom containing no nanoparticles.
B) In vitro
Human pancreatic adenocarcinoma (BxPC-3)cells were seeded into 6-well plates (50,000 cells/ well) containing quartz coverslips (Alfa Aesar, USA) and incubated at 37°C with 5% CO2. Hybrid nanoparticles (5 μgml-1 & 50 μgml-1) were incubated with the cells for 24 hrs. Cells were washed with phosphate buffered saline (PBS) four times and the coverslips removed from the plate.
The cells were irradiated using the Chromacity 1040 nm for 60 seconds or 4 repetitions of 60 seconds with a 60 seconds cooling period between. After irradiation the coverslips were returned to the 6 well plate, fresh media added and incubated for 24 hrs. After this time, the cytotoxicity was measured using trypan blue exclusion as previously described. Cytotoxicity was measured in relation to control cells with no nanoparticles.
C) In vivo
Female Nu/Nu mice, five weeks of age (n=3), (Charles River, UK) were kept in pathogen-free conditions (weight of mice was 20–25 g). Human pancreatic cancer cell line BxPC-3 was cultured to 90% confluence in RPMI 1640 supplemented with 10% fetal bovine serum and 1% penicillin streptomycin. The cells were washed twice with cold PBS and harvested with trypsin for 10 min at 37°C. The cells were washed three times with PBS and resuspended in 50:50 media:PBS. The tumour cell suspension (3.0 × 106 cells in 100 μl of 50:50 PBS:media) was injected subcutaneously (s.c.) in the right flank of each mouse. When the tumour became palpable (approximately after one week), measurements in two dimensions with Vernier callipers were carried out twice a week and the volume of the tumours calculated according to the following equation: V = 4π/3 * [(D1+D2)/4]3
Once tumour volume reached a maximum of 0.9 cm3 the mice were sacrificed and used for imaging immediately post mortem. Hybrid nanoparticle solution (0.2 mgkg-1 or 0.02 mgkg-1 100 μl) was injected intra-tumorally (I.T.) using a 26 gauge needle (Vet-Tech, UK). The tumour was irradiated using the Chromacity 1040 nm for 60 seconds and temperature change and heat dissipation measured using an Optris PI640 thermal imaging camera (Optris, Germany). The ΔT data was calculated in relation to a tumour bearing mouse control containing no nanoparticles.

Figure 1. Infrared monitoring of hybrid nanoparticles in 2% agar after 60 s irradiation with the Chromacity 1040 nm showing A) Thermal change over 120 s and B) Heat dissipation from laser source at 60 s irradiation (n=3,±SD).

Results:
The laser irradiation studies in agar phantom showed heating increase of up to 48°C for the 50 μgml-1 and 27°C for the 5 μgml-1 samples (Figure 1A). The maximum heating was achieved in both cases with a plateau in the graph being observed thereafter. The cooling profiles for both concentrations looked similar, whereby, heat was rapidly lost, followed by a slower return to ambient temperature. The heat dissipation studies (Figure 1B) showed that in both cases the heat spread from laser source was approximately 12 mm in each direction.
The cell viability was measured in BxPC-3cells containing either 50 μgml-1 or 5 μgml-1 hybrid nanoparticles, 24 h post irradiation (Figure 2). 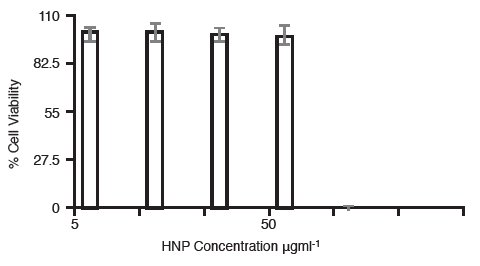 Here it was observed that those cells containing the lower particle concentration, did not experience any adverse effect on their viability, even after the multiple irradiation cycles. However, those cells which contained the higher concentration of particles (50 μgml-1) were no longer viable after both 60 s irradiation and multiple irradiations. This is probably due to the temperature increase inside the cells exceeding the threshold temperature (50°C) after which cells can no longer survive. Thermal rise and heat dissipation was measured in a xenograft bearing cadaver. The hybrid particles were injected intra-tumorally at the equivalent concentrations dependant on mouse weight.

Here the data showed that a greater increase in heat was observed compared to the agar phantoms with up to 80°C heating increase at 50 μgml-1 and a 26°C increase at 5 μgml-1 (Figure 3A). The reason for the difference to the agar data is not known. However, pancreatic cancer forms very dense solid tumours, and perhaps this has an impact on localised heating. Figure 3B shows the heat dissipation in the tumour tissue. Here we observed that at 5 mm radius from the irradiation point, the majority of heat had been lost with only small thermal changes beyond this point.

Benefits:
Comparing previous work on hybrid nanoparticle heating shows that the Chromacity 1040 has major advantages compared to the previously used 1064 nm source. Consistently, we observed that the Chromacity 1040 nm provides greater thermal rise both in agar and in tumours. Previously, at 5 μgml-1 no notable heating was observed compared to control samples. However, in this study in xenografts, those injected with 5 μgml-1 experienced 27°C temperature increases. Additionally, there was an 8-fold increase in temperature at 50 μgml-1 compared with the 1064 nm irradiation study.
These important findings show that for biomedical application more than a 10-fold reduction in nanoparticle concentration could be administered in order to experience similar heating effects. This would not only render formulations more cost effective but also reduce any question over the toxic burden of nanocarrier or long-term accumulation. This capability would enable either localised tumour ablation or thermally triggered drug delivery which is highly localised to the laser irradiation point, thus minimum impact on surrounding tissue would be experienced.