Describing how thermal imaging testing works to a layman would make them stand in awe and perspire. The concept of detecting an object’s infrared radiation (i.e. invisible heat) and finding faults in components in large systems before they lead to catastrophic damage, is an innovative yet relatively old technology.

What started as an experiment to aid in firefighting and the military in the 1970s has today become an integral part of non-destructive testing procedures. From power distribution systems to facility management, thermal imaging testing, with the help of modern low-cost infrared cameras, is saving the world in every imaginable field of engineering by detecting issues and helping in suppressing their impact right at the start.

Before understanding how wide and long-reaching the helping hands of thermal imaging testing are, it makes sense to know its importance in modern engineering. Take, for example, the case of a UK-based power company which saved thousands of dollars in warranty costs after they detected and successfully mended a component in one of their products.

The product in question was a power station gas turbine vane made of nickel-based alloy, which was subjected to a structural test to detect issues in the coating. Since even tiny changes in the coating or the material itself can cause vast operational errors in the turbine, the company wanted to double-check their homogeneity. What did they do?

Pulsed thermography – a variation of thermal imaging testing – where ‘pulses’ of light (high-intensity lux) are periodically directed at the sample. The infrared cameras simultaneously record how the heat passes through the object, helping engineers find out the minutest of structural problems.

Based on this information, companies also create images that can act as a reference for future troubleshooting and installation exercises. Thermal imaging testing, therefore, helps in detecting issues that are invisible to the naked eye.

This is top-notch quality check right here, where the final product is thermal imaging tested before it even goes out of manufacturing. Now imagine this same scenario with huge dams, pressure-sensitive objects like aircraft and space stations, windmills, and even household items like ceiling fans.

But why thermography and not any other process?

Thermal tests play a pivotal role in predictive maintenance around the world and across engineering fields mainly because of their accuracy and reliability. As observed in the example above, it is often the most important driver in a series of maintenance tests.

In engineering, even a small splinter can majorly affect a system’s functioning. And the most effective way to avoid missing gaps in components’ structure is to let physics and chemistry take control. But how? 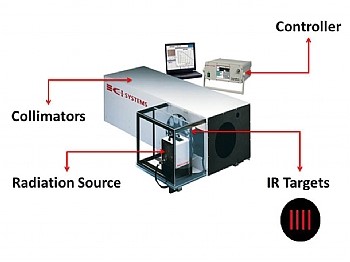 The principle of thermography is based on the fact that each object in this world has some infrared energy (usually in the form of heat). This energy, which is known as a heat signature, can be detected using infrared sensors. Since the heat signature almost often varies from object to object, thermal imaging testing equipment can easily detect variations in the temperature.

This, in turn, can lead to interesting observations. Of course, the infrared image has to be software-processed and translated to a heatmap for better observation since the end goal is to detect minute discrepancies. CI Systems has a series of such equipment that deal with infrared sensing.

In that regard, thermography has some additional selling points that make it the go-to procedure for structural error detection. Some of the most common are listed below:

Apart from these common advantages, modern  thermal imaging testers are capable of detecting more important information such as the following.

As technology advances with each passing year, the capabilities of modern thermal imagers are increasing. After the 1970s, infrared sensing began to be used in energy audit and fire detection applications. Companies like Honeywell and Texas Instruments started patenting variations of the technology, which would later go on to be found in one of the most ubiquitous objects of the 21st century so far: smartphones.

Today, thermal imaging testing is not just limited to facility maintenance like HVAC and roofing, but it also finds applications in process instrumentation (vessels and pipes), electro-mechanical equipment (windings and auto gearboxes), and military activities (infiltration).

The evolution of thermal imaging testing has been substantial in the past four decades. And like other similar concepts – such as integrating spheres – it will stand the test of time even as the possibility of civilization on Mars looms over. Space shuttles, anyone?