A Spectral Camera Makes All the Difference

Sei in: Home1 / Application Notes2 / A Spectral Camera Makes All the Difference

A Spectral Camera Makes All the Difference

Is it a Gas or a Dust Cloud?

The sky is a large blackbody radiation source. The emitted sky radiation covers all electromagnetic spectrum including the absorption wavelengths of a R-134a gas. The above infrared picture shows an image of a cloud. It can be a dust cloud that reflects the sky radiation or a target gas. CI Systems’ spectral gas imagers can reveal the answer in seconds, without any prior knowledge. In this case it was a R-134a gas. CI Systems’ spectral gas imagers are designed to identify target gas clouds.  The explanation below describes the main difference between a FLIR camera and CI Systems’ gas imager. 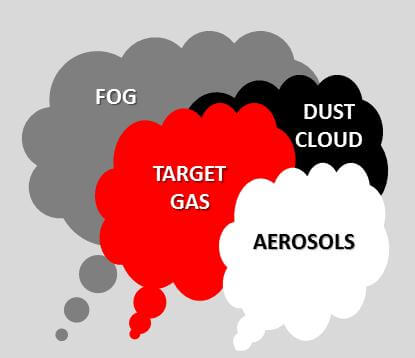 In the traditional type of infrared camera for gas detection, the focal plane array is tuned to a very narrow spectral region where the gas has a strong absorption line, so that it can be detected and visualized. This tuning is done by a built-in filter mounted inside the IR camera dewar. Once the filter is chosen and mounted it cannot be changed.

This technique limits the systems flexibility in the sense that different gases with an absorption feature in the same spectral range of the filter cannot be distinguished among themselves.The diagrammatic figure on the left side illustrates a situation of false alarm. A dust cloud that reflects the sky is seen by a single band IR camera as a cloud of target gas. 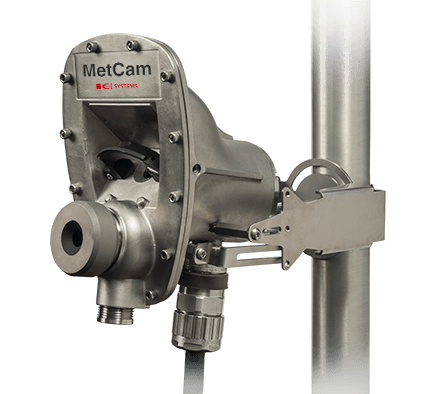 An IR camera capable of providing images in a number of spectral bands can better identify a target gas. Spectral scanning or change detection techniques are better able to distinguish between the target gas and its surroundings and one gas from another. Some of the advantages of a multiple IR band imaging over a simple FLIR camera or single wavelength FLIR are:

Selectivity in the Presence of Interferences 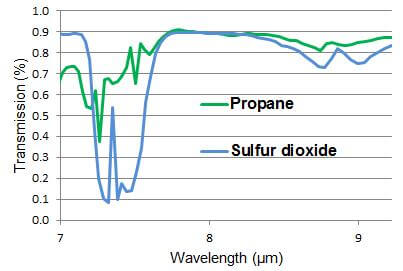 Though sensitivity is a key parameter for a gas detection camera, it is the selectivity (the ability to discriminate the target gas from interferences to avoid false alarms) that becomes the limiting performance factor in real-world settings.

Traditionally, FLIR gas detection cameras avoid the effect of interferences by measuring the gas absorption either at a single wavelength or over a narrow wavelength region where the target gas absorbs and the “noise gases” do not absorb. This approach has been successful for the detection of gases with a sharp spectral feature and in minimal interference conditions.

In cases when the selectivity is a key parameter to minimize the system’s false alarm rate a gas spectral imager can do a much better job. The capability of a gas spectral imager to resolve the various spectral features of a gas of interest while other gases are present often depends on its Spectral resolution. To a certain limit, the higher the spectral resolution, the higher the selectivity will be. However, trade-offs between the spectral resolution and other important parameters (such as for example measurement time and price) must be considered, when designing a system. The above figure shows the infrared absorption spectra of Propane and Sulfur dioxide. Both are in the same region between 7.2 and 7.7 micrometers and overlap significantly, but their shape is different. CI Systems’ spectral gas imager can do the job.

The above figure shows the infrared absorption spectra of Propane and Sulfur dioxide. Both are in the same region between 7.2 and 7.7 micrometers and overlap significantly, but their shape is different. CI Systems’ spectral gas imager can do the job.